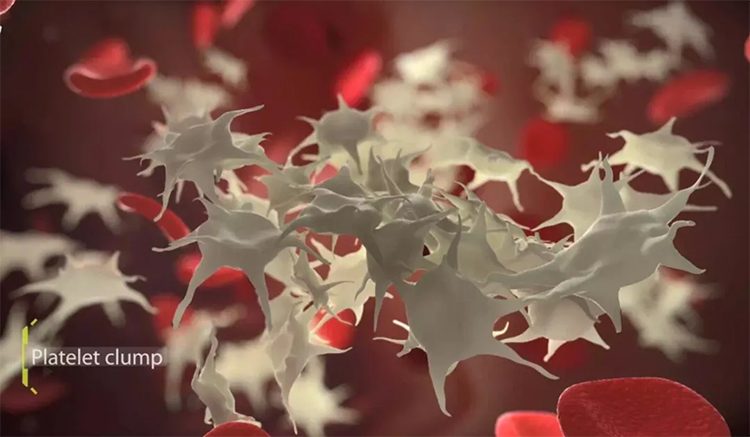 Resolving platelet clumping has been a headache for laboratory technicians.
Is there a hassle-free solution?

Let's look at two clinical cases that happened during the COVID-19 pandemic.

A Tale of Two Hospitals

The first case presented here was courtesy of San José Osorno Base Hospital in Chile. A patient had spent prolonged periods at the San José Osorno Base Hospital (HBSJO) between January and March 2020 without any history of thrombocytopenia. While at HBSJO, the patient needed care for an acute gastric ulcer bleed and a post-surgical infection. But as COVID-19 cases rose, so did the tensions and hospitalizations at HBSJO.

For their safety, all non-COVID-19 patients, including this patient, needed to be transferred to other hospitals. He was then moved to Purranque Hospital for continued treatment. Purranque Hospital,while safely away from COVID-19, could not provide the same comprehensive services as HBSJO if an urgent clinical case were to arise. So, we go from one patient’s story to the tale of two hospitals. 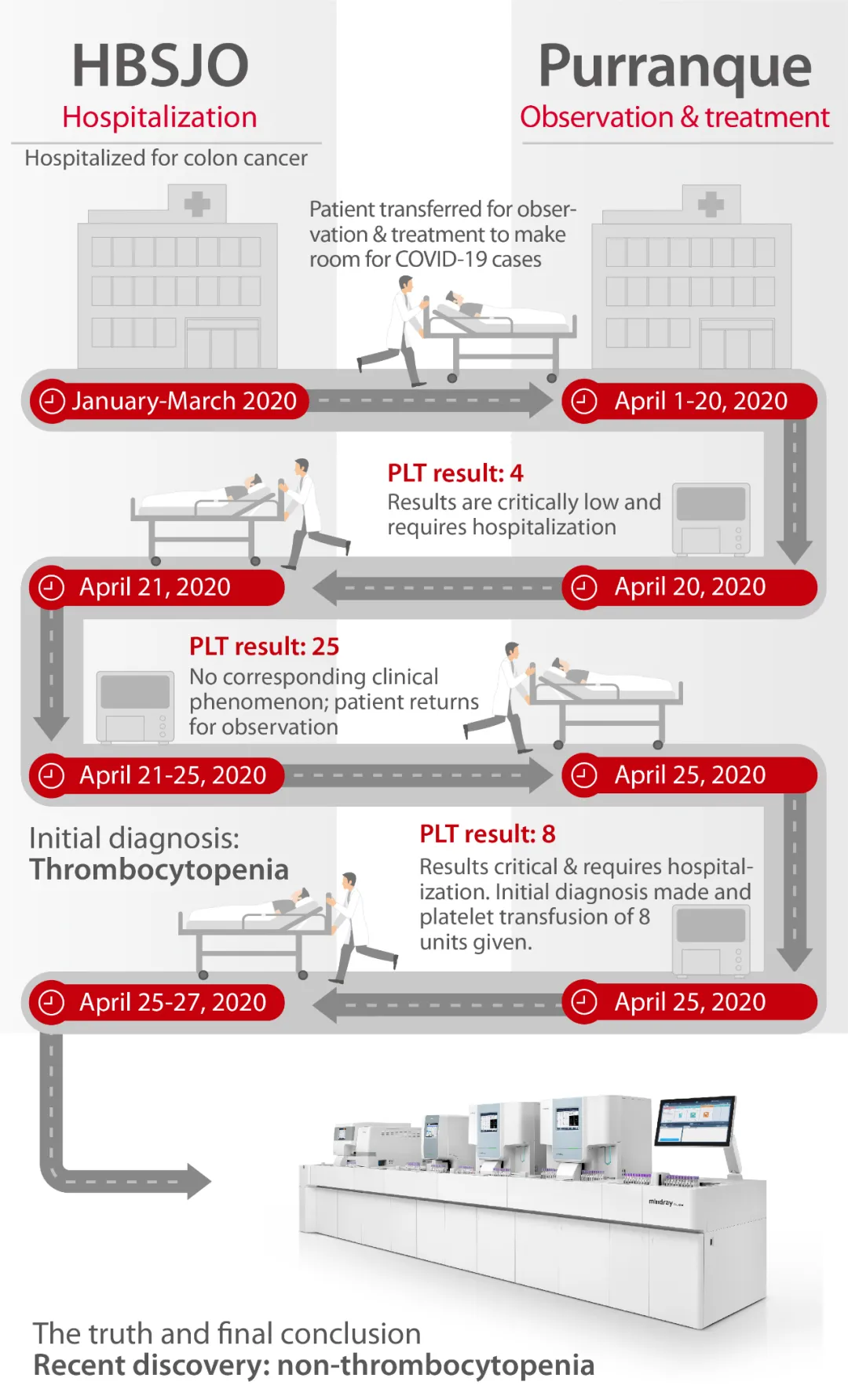 As can be seen, the patient’s clinical symptoms were not consistent with the test results that were given. In order to study the interference of anticoagulants on platelet counts, the laboratory staff from HBSJO collected two samples from the patient and conducted a study on Mindray CAL 8000 Cellular Analysis Line to test two different types of anticoagulants - EDTA and sodium citrate (3.2%). And the result was as follows: 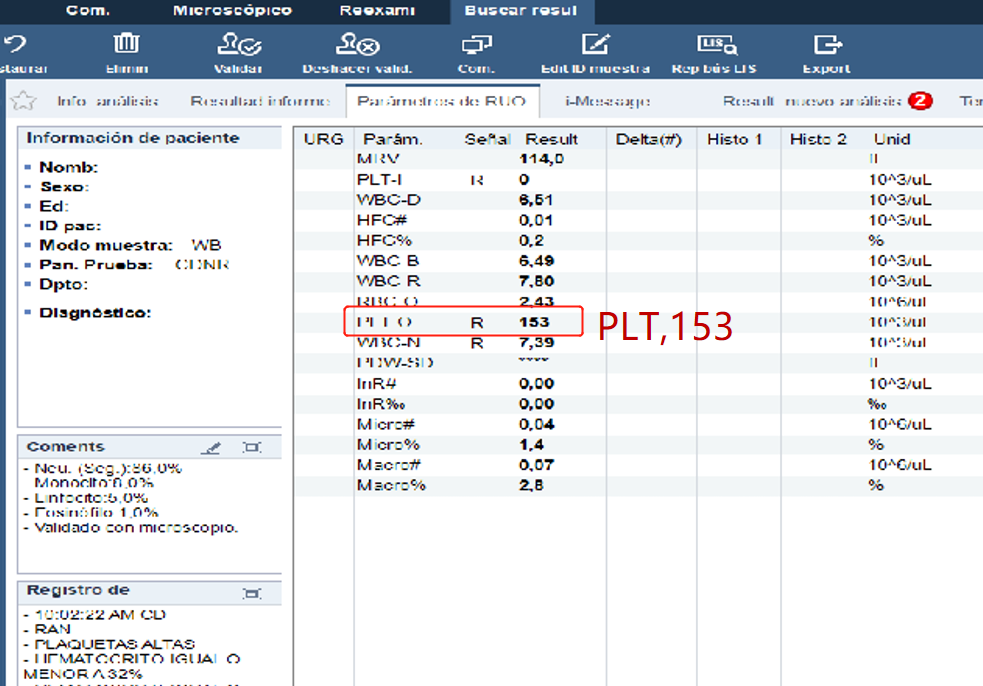 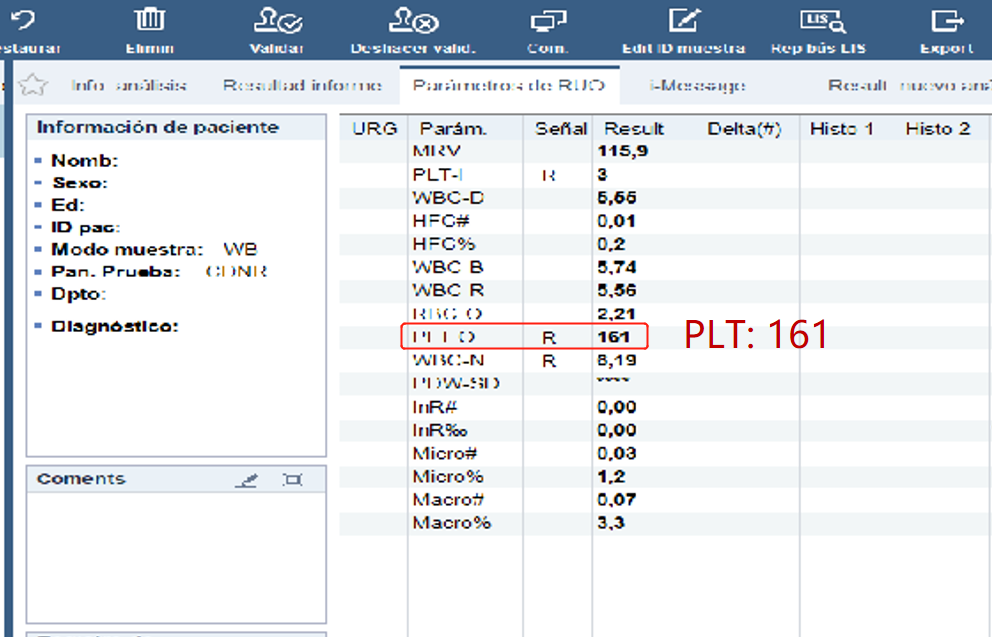 Looking at the results under a microscope, the truth was found. After an unforgettable back- and-forth between hospitals, the patient was finally given the right diagnosis and the correct medical treatment.

A Tricky but Solvable Medical Issue

PLT aggregation can lead to false diagnoses of thrombocytopenia, but it’s not unsolvable.

Here, on the other side of the planet, we had a case of a 23-year old male from China who was admitted to the Infectious Disease Department of a Chinese Hospital.

The patient had a CBC performed on Mindray CAL 8000 Cellular Analysis Line. According to the records, the platelet counts for this patient were usually 100+, but currently they were only at 61 which triggered a flag for “platelet clump” by CAL 8000. Under the microscope, however, no PLT aggregation was seen. 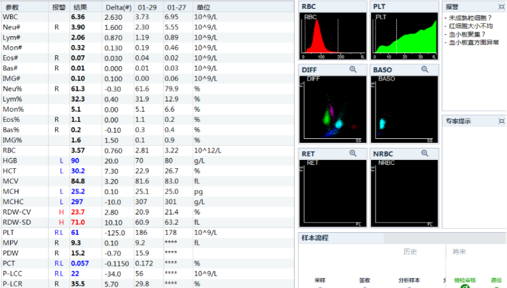 The laboratory technician did the first observation under a low-power lens, where no platelet aggregation was found. Using an oil microscope, the number of platelets were evaluated again. And there was still no noticeable evidence of clumped PLT.

Histogram of the sample (left) and normal histogram (right)

Looking at the histogram of the sample, it should indicate there were small red blood cells or fragments. Compared to the normal scatter plot, the sample’s scatter plot had a cluster of blue particles, which indicated there was platelet aggregation. 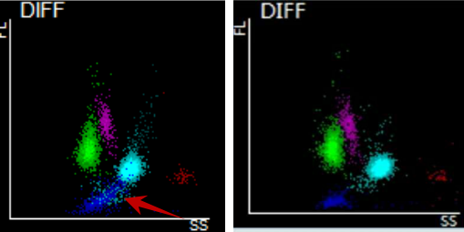 The technicians kept looking for clues, all the way at the edge of the microscope slide. 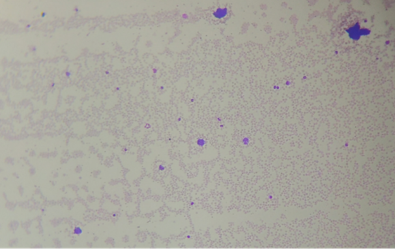 The RET channel on CAL 8000 was opened and a PLT-O result was reported. 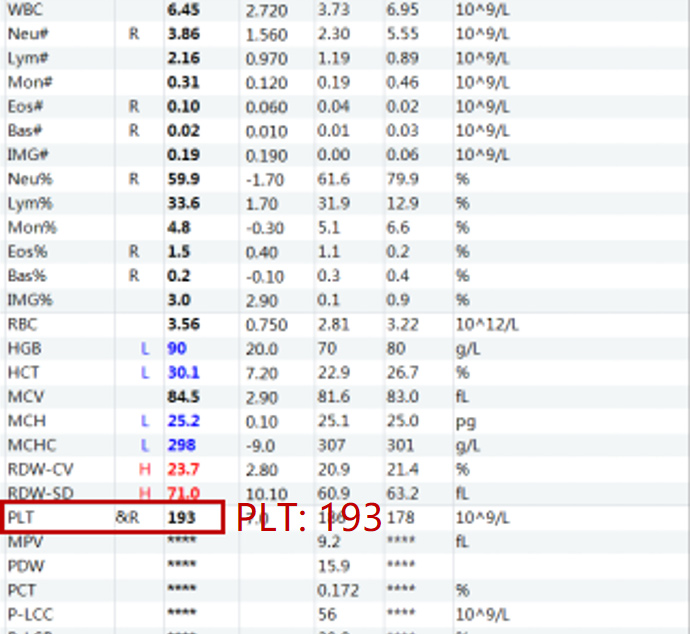 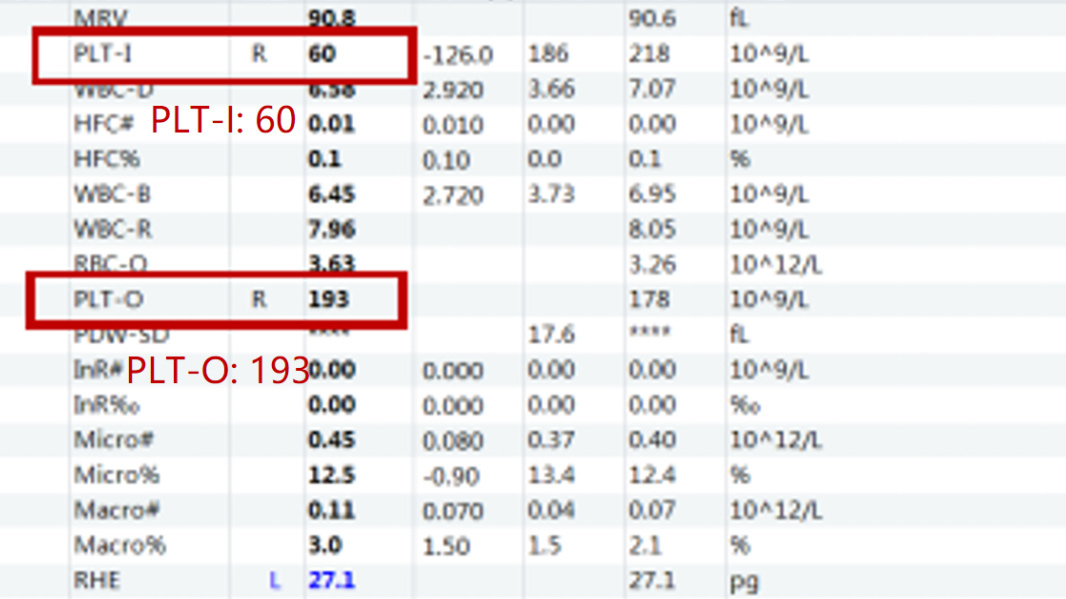 Based on the data, checking the PLT-O numbers can make it easy to identify a falsely low PLT reading caused by PLT aggregation - and easy to avoid a misdiagnosis. 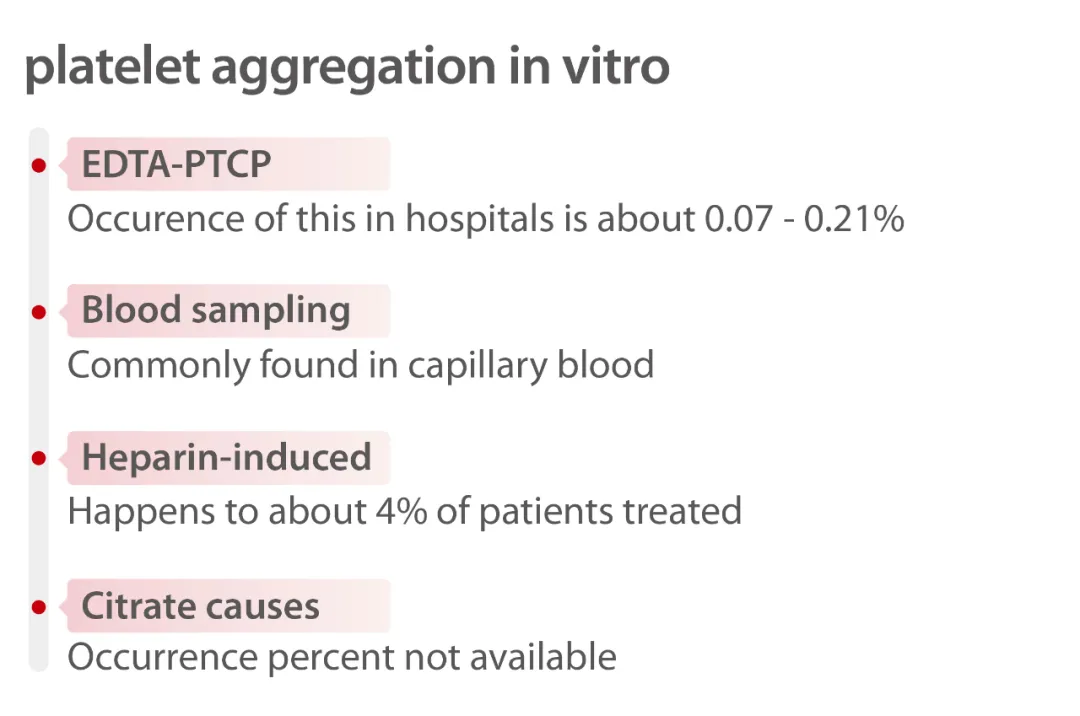 EDTA-dependent pseudothrombocytopenia (EDTA-PTCP) induced by EDTA anticoagulants is a common laboratory phenomenon. So when it does happen and isn’t quickly identified, it creates misinformation which may lead to a misdiagnosis and, ultimately, the wrong medical treatment for the patient.

The good news is that, with technological advancements in laboratory medicine, more and more parameters can be added to the hematology analyzer to avoid situations like that. Currently, platelet testing can be done through PLT-I (based on DC sheath flow impedance) and PLT-O (based on nucleic acid fluorescent staining and done on the RET channel). When there is a blood sample with a high possibility of platelet aggregation, the PLT-O detection technology by the Mindray BC-6000 Series Auto Hematology Analyzer and the CAL8000/6000 Cellular Analysis Line can effectively correct PLT counts - especially when it comes to blood samples with pseudo-platelet reduction due to EDTA. 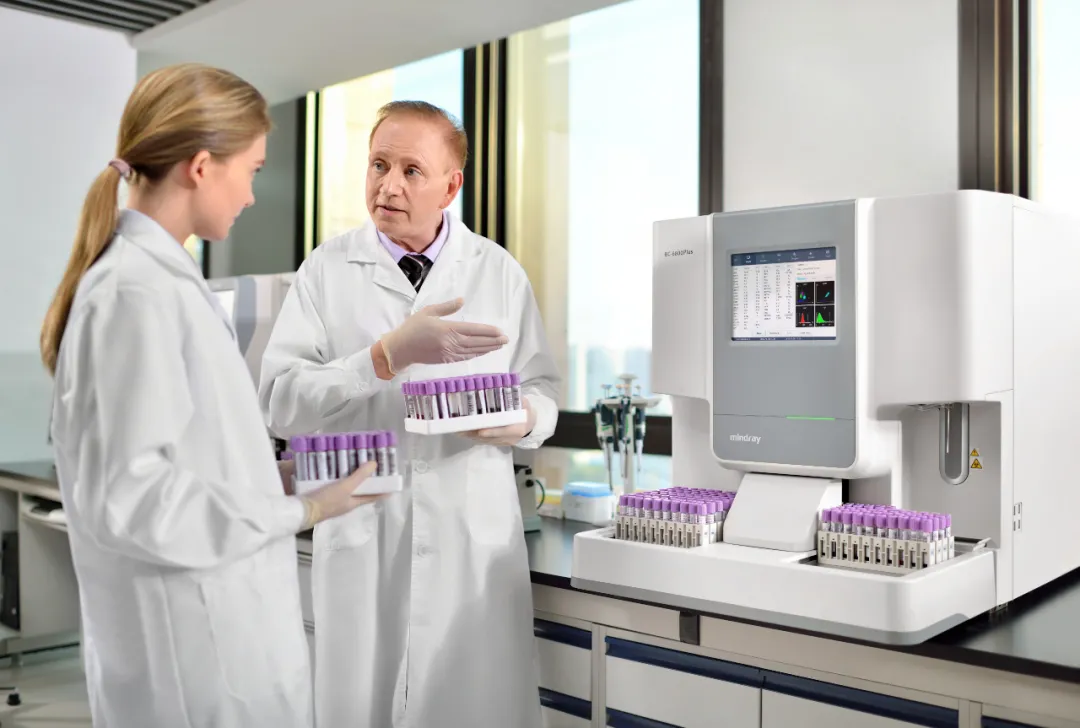