2013-07-05
Mindray’s BeneView T1 patient monitor won the silver award in the International Design Excellence Awards (IDEA®) 2013 competition held by the Industrial Designers Society of America on July 1, beating hundreds of contestants. This is the third consecutive year that Mindray has won an award since the company first started participating in the prestigious contest in 2011.

IDEA’s jury picked Mindray’s BeneView T1 out of 687 finalists because of its ultra-mobile design to meet the particular challenges of monitoring patients in transfer. The jury, comprising 24 international design experts, was impressed with the following T1 features:
. Its modern and compact shape ensuring easy transportation
. An ergonomic carrying handle that improves mobility
. Its advanced networking capabilities, which guarantees the continuity of all data
. Its multiple mounting options, which reduce the need for time-consuming cable reconnections

Mindray’s Beneview T1 will be exhibited on August 21 at a ceremony during the IDEA 2013 International Conference in Chicago in the U.S. It will also be publicized in the IDEA 2013 Web Gallery, an online publication, in July.

About IDEA
Founded in 1980 by IDSA, the International Design Excellence Awards (IDEA®) program is considered one of the most preeminent design competitions in the U.S. with its scope and influence reaching far beyond the country’s boundaries. The IDEA fosters business and public understanding of the impact of design excellence on the quality of life and the economy. 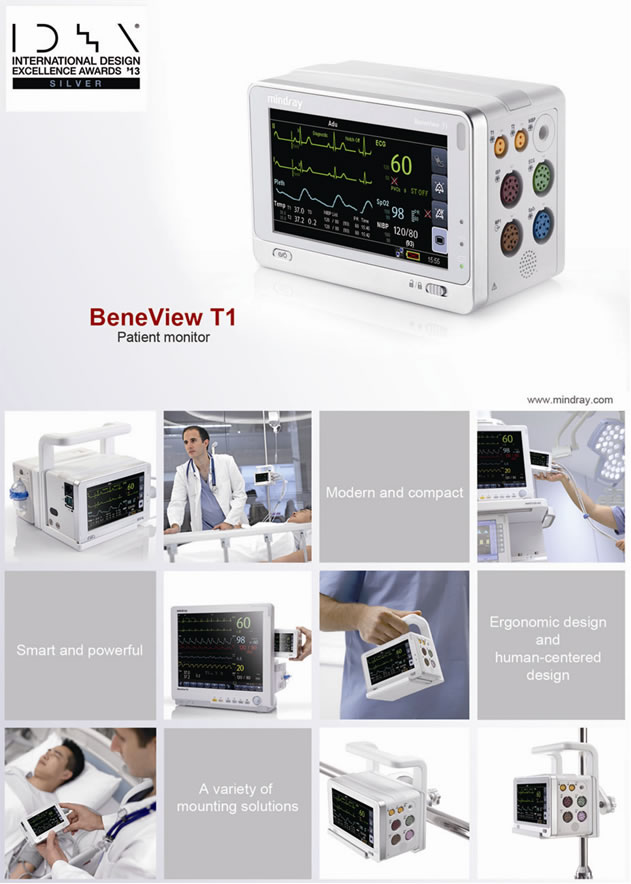